THE PAIN OF SEPARATION!

THE PAIN OF SEPARATION.

The pain of separation is the root of the ego. It is the root delusion of every human being. It is something that we all suffer from before we understand it and get rid of it. It is the number one killer of humanity.

Separation is a finite delusion that eventually ends. Let us quicken it's demise and light the lamp of love wisdom today!

Getting out of the ego and the pain of separation takes time and requires understanding, tolerance (say the Lord's prayer everyday - forgiveness) and patience, but WE MUST START SOMEWHERE! A little in the right direction is worth a life in the wrong.

We can speed up the process of dissolving the pain of separation with The Techniques of Energy Enhancement.

Pain can be dissolved by means of the Meditation of Energy Enhancement Alchemical VITRIOL taught for thousands of years.

Pain creates an impervious energy called Negative Karmic Mass which does not allow the passage of Spiritual Energies.

It is Negative Karmic Mass which creates the barriers out of which the Ego is formed.

The Ego is just a mass of Energy Blockages which separates us from our Higher Selves.

In Tolkien, The Lord of the Rings, where each of the Rings is a powerful symbol of a Chakra, one of the energetic centers within a human being, one of the 10 parallel processors of the mind, only one of which is intellectual, he says:-

"One Ring to Rule them all and in the Darkness Bind Them." The only way to control these energy centers is by throwing the One controlling Ring EGO Energy Blockage to the bottom of a deep volcano.

THIS SYMBOLISES THE ENERGY ENHANCEMENT TECHNIQUE TO DISSOLVE THE EGO

Gandalf the Grey, Wizard, and Ring Bearer of the "Ring of Fire"

This is a symbol of Alchemical Transmutation through Fire, which obviously Tolkien knew about.

ENERGY ENHANCEMENT COMBINES, SYNTHESISES ALL THESE TECHNIQUES AND MORE!!

TO SPEED UP!! THE PROCESS OF YOUR EVOLUTION.

Man is gifted with reason; he is life being aware of itself; he has awareness of himself, of his fellow man, of his past, and of the possibilities of his future. This awareness of himself as a separate entity, the awareness of his own short life span, of the fact that without his will he is born and against his will de dies, that he will die before those whom he loves, or they before him, the awareness of his aloneness and separateness, of his helplessness before the forces of nature and of society, all this makes his separate, disunited existence an unbearable prison. He would become insane could he not liberate himself from this prison and reach out, unite himself in some form or other with his fellow humanity, the world, and the Universe.

The experience of separateness arouses anxiety; it is, indeed, the source of anxiety (and the root cause of the ego). Being separate means being cut off, without any capacity to use my human powers, potential and skills. Hence to be separate means to be helpless, unable to grasp the world - things and people - actively; it means that the world can invade me without my ability to react. Thus, separateness is the source of intense anxiety (neurosis, psychosis, paranoia, and depressive illness). Beyond that, it arouses shame and a deep feeling of guilt. This experience of guilt and shame in separateness is referred to in the Biblical story of Adam and Eve. While recognizing their separateness they remain strangers until they learn to love one another.

This awareness of human separation (the root of all suffering) without the reunion of love is the source of this shame, guilt, anxiety, depression, and helplessness. Thus we see how the delusion of the separate ego takes hold of a person with this profound insight into the human condition.

The very thought that "I am separate" is the seed of the tree of egoism and all the negativity and suffering that is it's fruit.

The deepest need of man is to overcome his separateness, to leave the prison of his aloneness. The absolute failure to achieve this aim means insanity, because the panic of complete isolation can be overcome only by such a radical withdrawal from the outside world in the hope that the feeling of separation disappears. The logic is that because the world outside has "disappeared" due to the person's withdrawal from it, then the pain of separation from the world will also disappear.

Throughout history each one of us is confronted with trying to find a solution to this painful delusion. How to overcome separateness, how to achieve union, how to transcend one's own individual ego and find at-onement with life. The search for the antidote to this delusion has been the same for everyone throughout history. The question is the same, the answer varies. The history of religion and philosophy is the history of these answers.

Some ways which man has attempted to overcome this delusion of separation:

The Birth of Society.

In a primitive society the group is small; it consists of those with whom one shares blood and soil. With the growing development of culture, the group enlarges; it becomes the citizenry of a polis, the citizenry of a large state, the members of a religious group. Even the poor Romans felt pride because he could say "civis romanus sum"; Rome and the Empire were his family, his home, his world. Also in contemporary Western society the union with the group is the prevalent way of overcoming separateness. It is a union in which the aim is to belong to the herd.

If I am like everybody else, if I have no feelings or thoughts which make me different, if I conform in custom, dress, ideas, to the pattern of the group, I am saved; saved from the frightening experience of aloneness.

The dictatorial systems use threats and terror to induce this conformity; the democratic countries use suggestion and propaganda. There is, indeed, one great difference between the two systems. In the democracies non-conformity is possible and, in fact, by no means entirely absent; in the totalitarian systems, only a few unusual hereos and martyrs can be expected to refuse obedience. But in spite of this difference the democratic societies show an overwhelming degree of conformity.

The reason lies in the fact that there has to be an answer to the quest for union, and if there is no other or better way, then the union of herd conformity becomes the predominant one. One can only understand the power of the fear to be different, the fear to be only a few steps away from the herd, if one understands the depths of the need not to be separated.

Sometimes this fear of non-conformity is rationalized as fear of practical dangers which could threaten the non-conformist. But actually, people want to conform to a much higher degree than they are forced to conform, at least in the Western democracies.

Most people are not even aware of their need to conform. They live under the illusion that they follow our own ideas and inclinations, that they are individualists, that they have arrived at their opinions as the result of their own thinking and that it just happens that their ideas are the same as those of the majority. The consensus of all serves as a proof for the correctness of "their" ideas. Since there is still a need to feel some individuality, such need is satisfied with regard to minor differences; the initials on the handbag or sweater, the name plate of the bank teller, the belonging to the Democratic as against the Republican party, to the elks instead of to the Shriners become the expression of individual differences.

The advertising slogan of "it is different" shows up this pathetic need for difference, when in reality there is hardly any left.

This increasing tendency for the elimination of differences is closely related to the concept and the experience of equality, as it is developing in the most advanced industrial societies. Equality had meant, in a religious context, that we are all God's children, that we are all one. It means also that the very differences between individuals must be respected, that while it is true that we are all one, it is also true that each one of us is a unique entity, is a cosmos by itself.

Equality as a condition for the development of individuality is also the meaning of the concept in the philosophy of the Western Enlightenment. It meant (most clearly formulated by Kant) that no man must be the means for the ends of another man. That all men are equal inasmuch as they are ends, and only ends, and never means to each other. Following the ideas of the Enlightenment, Socialist thinkers of various schools defined equality as abolition of exploitation, of the use of man by man, regardless of whether this use were cruel of "human."

Union by conformity is not intense and violent; it is calm, dictated by routine, and for this very reason often insufficient to really pacify the existential feeling and anxiety of separation. The incidence of alcoholism, drug addiction, compulsive sexualism, need for fame and attention, holistic disease, depression and suicide in contemporary Western society are symptoms of the very real existence of the pain of separation that is still unresolved beneath the attempt to pacify it by the union of conformity.

THE FULL SOLUTION IS ENLIGHTENMENT.

The yogi swami's tell us the story of the two i's. In the alphabet there are two i's. The little 'i' and the capital 'I'. When we experience life from the ego perspective then we are experiencing the life-view of the little 'i' - we got spotted! But when we remove the spot we return to that One Universal Capital 'I'. Remove the spot and get sane, get back to Gnosis, Vidya, Spiritual and Universal "Knowing" beyond which there are no further questions and no further sense of separation.

So we simply dissolve the ego life a salt crystal in warm water. When this little sense of separation has gone then what remains? Why! The Totality of Existence - Everything.

That is why the enlightened say that "this knowing doesn't change." End of separation and contact with the eternal and infinite Ocean of life is Reality, Sanity, Normality. It is only the delusion of the ego state that is the root dis-ease of life.

Once the ego is gone then the expressions and functions of each chakra are experienced in their natural, ego-free, nonattached, unified way.

The question arises, "Who is the experiencer of the Universal Mind of Variety and Creative Diversity (the 6 chakras of the Chittam)?"

The experiencer is the same One Universal Being - God.

Then we fear not the expressions of the chakras (this appearance of Universal Mind). We fear not the process of birth, growth, maintenance, decay, and death. These are just changes in the Mindstuff, being experienced by the One Eternal, Infinite, Joyful, blissful and Universal Awareness (Spirit) - unborn and undying.

We realise them as God (the Universal Self) expression Itself to Itself. It's all just for fun.

But as Paramahansa Yogananda tells us:

"Life with understanding of God is fun. Without God, life is everything but fun."

If we don't know and realise the One Eternal Universal Spirit in All Things, the Source and Substance of All Creation, then life will be experienced in the darkest of ignorance and egoism which is "everything but fun."

THE TECHNIQUES
OF
ENERGY ENHANCEMENT

The ultimate ego-busting system! Leaves no stone unturned! The removal of the ego and the restoration of full health, sanity, and the normal enlightened state is the whole process of The Techniques of Energy Enhancement. 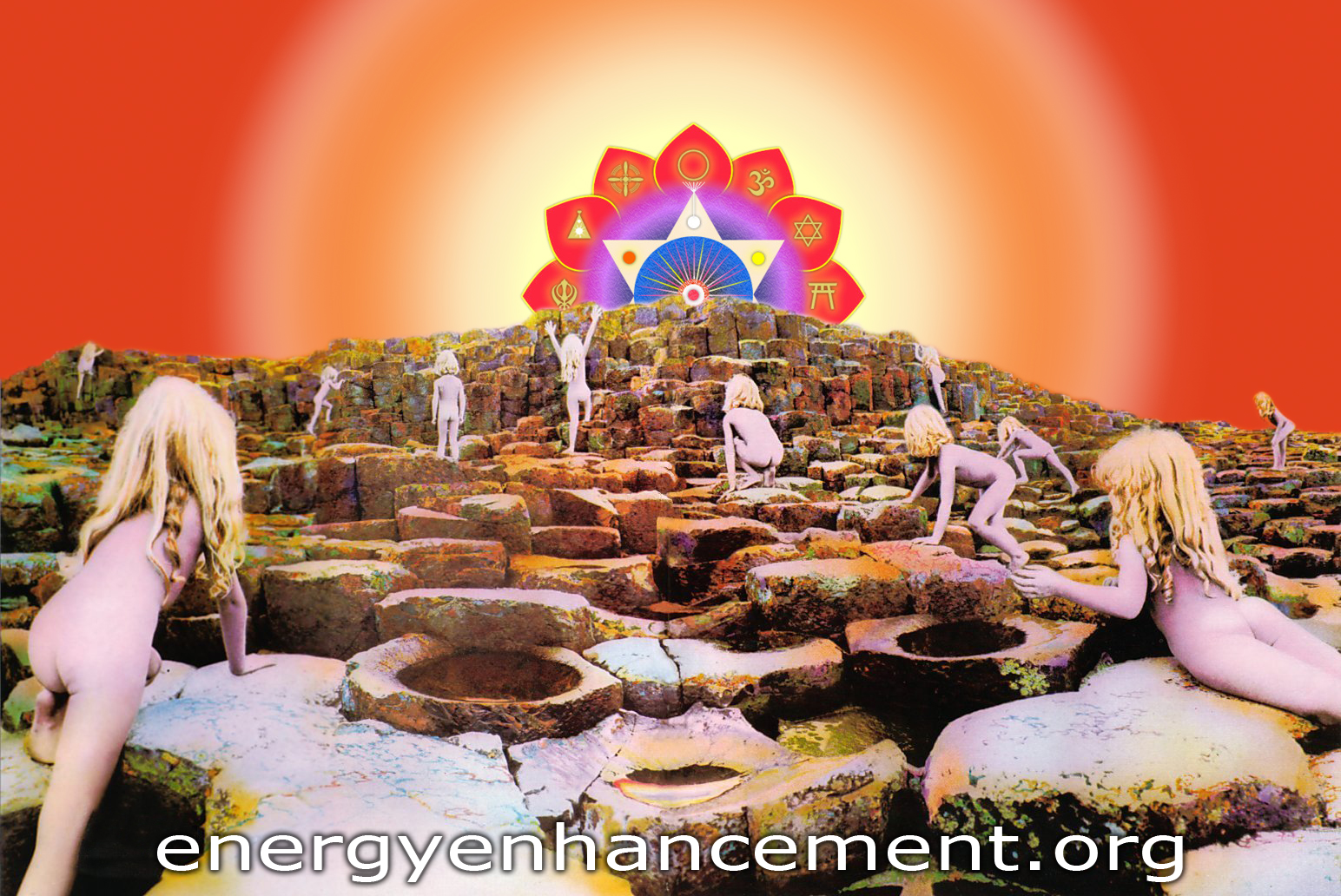