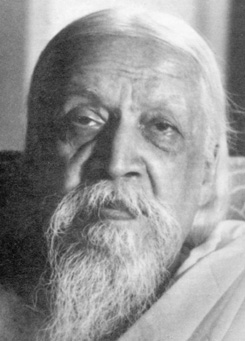 The Place of Humanity in Universal Evolution

"Human's highest aspiration - their seeking for perfection, their longing for freedom and mastery, their search after pure truth and unmixed delight - is in flagrant contradiction with their present existence and normal experience."

A spiritual evolution, an evolution of consciousness in Matter in a constant developing self-formation till the form can reveal the indwelling spirit, is...the key-note, the central significant motive of the terrestrial existence. This significance is concealed at the out set by the involution of the Spirit, the Divine Reality, in a dense material Inconscience; a veil of Inconscience, a veil of insensibility of Matter hides the Universal Consciousness-Force which works within it, so that the Energy, which is the first form the Force of Creation assumes in the physical universe, appears to be itself inconscient and yet does the works of a vast occult (hidden) intelligence.

The obscure mysterious creatrix ends indeed by delivering the secret consciousness (chit) out of its thick and tenebrous prison; but she delivers it slowly, little by little, in minute infinitesimal drops, in thin jets, in small vibrant concretions of energy and substance, of life, of mind, as if that were all she could get out through the crass obstacle, the dull reluctant medium of an inconscient stuff (prakriti) of existence.

At first she houses herself in forms of Matter which appear to be altogether unconscious, then struggles towards mentality in the guise of living Matter and attains to imperfectly in the conscious animal.

This consciousness is at first rudimentary, mostly a half subconscious or just conscious instinct; it develops slowly till in more organized forms of living Matter it reaches its climax of intelligence and exceeds itself in the Human form, the thinking (and feeling) animal who develops into the reasoning mental being but carries along it, even at its highest elevation, the mould of original animality, the dead weight of subconscience of body, the downward pull of gravitation towards the original Inertia and Nescience, the control of an inconscient material Nature over its conscious evolution, its power for limitation, its law of difficult development, its immense force for retardation and frustration.

This control by the original Inconscience over the consciousness emerging from it takes the general shape of a mentality struggling towards knowledge but itself, in what seems to be its fundamental nature, an Ignorance. Thus, hampered and burdened, the mental / emotional human has still to evolve out of itself the fully conscious being, a Divine Humanity or a spiritual and supramental superhumanhood, which shall be the next product of evolution.

This terrestrial evolutionary working of Nature from Matter to Mind and beyond it, has a double process of physical evolution with birth as its machinery, - for each evolved form of body housing its own evolved power of consciousness is maintained and kept in continuity by heredity; there is, at the same time, an invisible process of soul evolution with rebirth into ascending grades of form and consciousness as its machinery.

The first by itself would mean only a cosmic evolution; for the individual would be a quickly perishing instrument, and the race, a more abiding collective formulation, would be the real step in the progressive manifestation of the cosmic Inhabitant, the universal Spirit: rebirth is an indispensable condition for any long duration and evolution of the individual being in the earth-existence.

Each grade of cosmic manifestation, each type of form that can house the indwelling spirit, is turned by rebirth into a means for the individual soul, the psychic entity, to manifest more and more of its concealed consciousness; each life becomes a step in a victory over Matter by a greater progression of consciousness in it which shall make eventually Matter itself a means for the full manifestation of the Spirit.

Humanity occupies the crest of the evolutionary wave. With them occurs the passage from an unconscious to a conscious evolution.

(Sri Aurobindo: The Future Evolution of Man - chap - The Place of Man in Evolution: pg 29)

Fill in the Form BELOW!!