THE STAGES OF DEVELOPMENT AND THE SEVEN CHAKRAS

Erickson's Eight Ages of Man and The Chakras.

Maslow's Hierarchy of Self Actualisation
and their correlation to The Chakras

The Stages of Individual Human Development are a process of exploration, understanding, and most importantly integrating important life issues which have a direct influence on the well being and development of all people.

Fortunately, failed integration of a stage is not irreversible, but conscious effort needs to be applied to HEAL any damage caused and to successfully integrate the life lessons at a later date in the individuals life.

THE SEVEN STAGES OF DEVELOPMENT
ACCORDING TO
ENERGY ENHANCEMENT

THE BASE CHAKRA
Mooladhara

The Birth of the Physical Self at 4 months
Chakra 1: The Base Chakra Opens.

Psychologists refer to this Stage as primary autism, primary narcissism, oceanic, protoplasmic, adualistic (sense of all being one), and indissociated. The baby needs to understand that the outside world exists. There is something which is not it. It begins to do this around 4 months. The earlier a problem begins the deeper the psychosis.

Also included at this stage - the symbolism of Baptism - is the beginning of Cultural Conditioning and Inherited Belief Systems. The child is at the start of this process which will continue for, at least, the next 12 - 18 years.

The Birth of the Personal Emotional Self around 15-24 months.
Chakra 2: The Relationship Chakra Opens.

The Sweet Child and The Narcissistic 'Spoiled' Child.

This stage, if mismanaged by the child's guardians, can be extremely egocentric or narcissistic and the child may treat the world as its oyster. Around 15-24 months the child begins to recognize that it does not always get what it wants. The world sometimes says "No." Difficulties in accepting "no" cause narcissistic personality disorders. If this important stage is mismanaged then the strategies to gain attention may become an integrated part of the developing individual's personality and this may produce very serious problems throughout the person's life.

Failed Integration of this Stage: The Narcissistic 'spoiled' Child.

Normally, the integration of the Second Chakra occurs between 15 and 24 months. The child at this time thinks that it owns the world and the world and everyone in it, is here to serve the child. The child has great difficulties in accepting the fact of the Law of Economy, that sometimes, impersonally, the world says NO!

This causes a great deal of disappointment, which causes two results: -

Both of these results are the major cause of difficulties in the adult becoming a more useful, happy, peaceful, understanding, and selfless member of society. Because of the failed integration of this stage, the next developmental stages are sabotaged by this problem. People cannot fit into society due to this major problem which sabotages all the rest of the stages of evolution. Individuals suffering from the growth of the narcissistic personalities, will experience very real problems in actualizing a satisfying and wise life, unless they find a way out of this nightmare. THE TECHNIQUES OF ENERGY ENHANCEMENT offers a pathway out of this darkness.

The Integration of the Heart chakra in that person is sabotaged and the person may become so distant from meaningful and mature relationships that the tendency towards becoming "a selfish tyrant" is greatly increased. If they become a leader they may well be a tyrant, or a "Bad King" as it says in the book, "1066 and all that".

Indeed, what can stop the integration of the NO can be too many yes’s from the parents, without any explanation or teaching. The child gets its own way or is dealt with arbitrarily, with no teaching or logic.

A phrase for this in the UK is that the child becomes "spoiled". A spoiled child is an ideal way to represent a failed integration of selfish desire.

Another symptom of failed Stage Two Integration, is the experience of extreme jealousy. Family members who are all connected by the second chakra may experience intense jealousy if their position in the family is threatened in anyway. For example, Mothers and Fathers who feel jealous when their sons and daughters give attention to other adults may close the family down to outside influences. This is the production of an incestuous family situation - all connected by the inappropriate second chakra.

Successful integration of this Stage: The Sweet Child.

The individual will understand and integrate the skill of balance in giving and receiving which is essential for healthy relationships. The child will learn how to handle rejection and understand the beauty of humility, the understanding of the ability to be selfless, the mastery of strong emotional desire and aversion. The ability to transcend - overcome - and thus master "the pleasure principle". The ability to say "Yes" and "No" to the pleasure principle which will guide them well through life's many temptations.

The understanding that "No" is just as valid an answer as "Yes", and that trying to constantly satisfy selfish desires does not really amount to much satisfaction. A lesson that every drug addict, alcoholic, and narcissistic megalomaniac failed to understand at this stage.

THE TECHNIQUES OF ENERGY ENHANCEMENT offers techniques and understanding that can enable most people to overcome the problems at this stage, whether as a child, or later in life as part of a self-actualisation or developmental pathway.

The Birth of the Conceptual, Intellectual Self from 7 Months to 7 Years
Chakra 3: The Solar Plexus Center.

Images, Symbols and Concepts. Images develop around 7 months. Symbols emerge during the second year and dominate the system from 2-4 years.

Concepts dominate awareness from 4-7 years. The system enters the linguistic world and the world of the mind.

The individual begins to explore their ego, their sense of autonomy, self-esteem, self-respect, and how it fits in with groups.

This is how it is possible to have a strongly developed intellect, ego, charisma and power, but and still act like a Hitler, Mao or Stalin.

This is the ability to form mental and moral rules and to take up and understand the role and feeling of others. The ability to stand in another's shoes. External consideration, which is one of the concepts, developed by Gurdjieff.

The first stage of the Heart opening is very conformist as it associates with the family, the city, the country or the world. "My family or country right or wrong", it says. This is the stage of wanting to fit with the tribe, the group, of gangs, the Ku Klux Clan and football clubs. But as it begins to understand that if you partially love one thing, then you must hate everything else for example Hitler's "Loving the Fatherland", allowed Germany to go to war with the rest of the world.

This is a major pathology, which prevents the next stages of growth. It is also the Stage at which most of the people in this world are stuck. Surveys suggest that 96% of all Americans are stuck at the level of the Football fan.

This is also the stage we use scripts, learned programs to help us fit with society.

Negative scripts are those learnt at a young age, Stage Two, then used as an adult. This is the cause of the Victim, The Violator, The Aloof, The Interrogator, The Seducer, and The Selfish, Jealous, Competitive Star. For example, script pathology is when we follow a script which says, "I’m no good." "I can never do anything right" In other words a "Poor Me" Who is stuck at the second stage of wanting love from the parents, like a child (Chakra 2), uses one of the Strategies to gain attention and sabotages the ability to fit with the society in general (Chakra 4).

This is the stage of healing through transactional analysis, family therapy, cognitive therapy and narrative therapy which just draws intellectual attention to your internal lies and attacks them head on.

The Worldcentric or Mature Personality. The Fulfillment of the Heart Chakra.
The Fifth Chakra Vishuddha Chakra.

You have started to transcend it. This is a major step forward in evolution whose major focus is the United Nations.

As the heart opens further then we understand a world view and want to help all human beings; not just selfishly want to help just one little country, or family. Once you see the World from a global perspective you can never go back.

This is also a very high stage of evolution on this planet at the moment. One survey found that only 4% of Americans had got as far as this stance.

People at this stage are "Marxists." They follow the creed of Groucho Marx who said, "I wouldn’t want to be a member of any group which would have me for a member!"

People at the level are genuinely multicultural. All individuals are to be accorded equal opportunity and benefits, regardless of race, country, sex or creed. This creates problems in a tribal world as worldcentrics find it difficult to talk to those at a lower evolutionary level and usually hide their evolution.

The Bodymind Integration of the Centaur
The Sixth Chakra.

A fairly large Quantum leap in evolution usually arrived at by people practicing meditation. At this stage "the self can no longer tranquilise itself with the trivial" as Kierkgaarde put it.

Existentialism is its aim and later its downfall, and there is nothing which will satisfy its search for meaning and existence, which was one of Heideggers constant points. Problems of this stage are that they deny the next transcendent stage. This concern with meaning in a drab and dying world is the central feature of pathologies at this stage.

Most people do not understand the concept of spiritual depth, which are really the levels of the astral and mental planes. We inhabit a telenovella, Coronation Street, Dallas, in the basement of the Astral plane, in our lives and when we sleep.

However the reports from all the worlds mystics is that this observing self inhabits and extends itself right up to the Source of All Things. We do not live in a drab existentialist flatland.

The Psychic: Sixth Chakra with the Crown Chakra.

The addition of the Crown Chakra to the Ajna Chakra shows the mind the beginnings of the depth of spiritual experience.

We explore preliminary meditative states; Arousal of Kundalini Energies, the subtle Psychic Channels or Nadis, Seeing the Acupuncture Meridians and even the Chakras and Auras.

We begin to see the energetic psychic connections between people, we spontaneously feel the energy currents as we give and receive from other people. We start to deal with higher thoughtforms like people who have died, created thoughtforms and even the sub-personalities, parts of the central stem of the personality, split off by undigested pain in the earlier stages.

The Causal: The Crown or Sahasrara Chakra.

The Crown Chakra is the experience of spiritual unity. This level of consciousness is referred to in meditative texts throughout the world as the Source, Pure Emptiness.

These States are called Unmanifest Absorption, Nirvikalpa Samadhi, Jnana Samadhi, Ayin, Vergezzen, Nirodh, Classical Nirvana. We realise that the Source of all things - of all other states of being - is the underlying fundamental of all diversity and variety.

Understanding and experiencing the Crown Chakra means that "My Father and I are one".

CONTROLS AT BOTTOM - CHOOSE THE TALK FROM THE SIDE BAR

WANT TO LEARN WHY "TRADITIONAL MEDITATION TECHNIQUES ARE DESIGNED TO FAIL"? 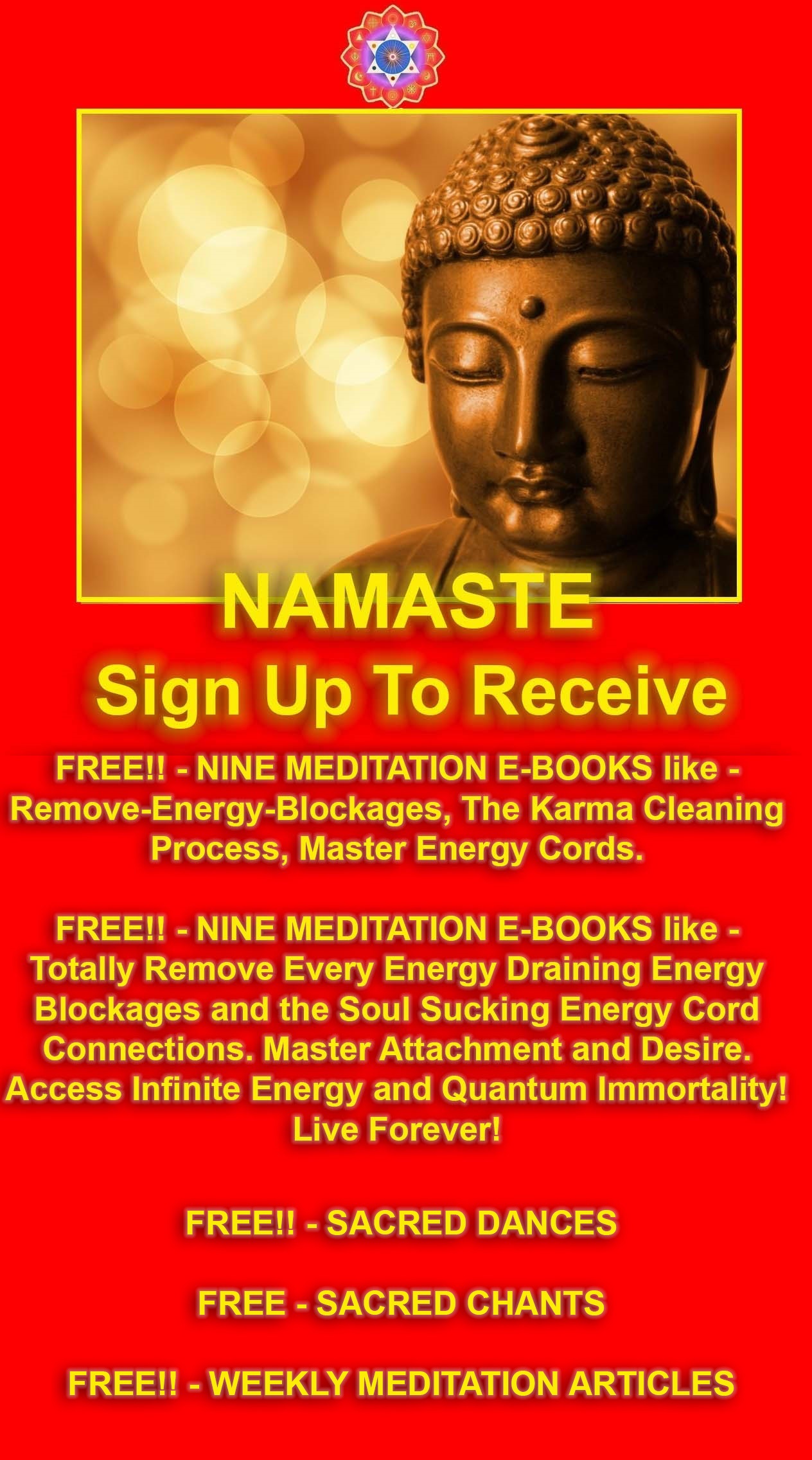 Fill in the Form BELOW!!