Part 3: Distillation of Shen, the Third Gem of Alchemy

Shen is the manifestation power of existence. When Shen is distilled things manifest. When Shen is distilled within the subtle body transcendent evolution can be attained. The human being distills shen naturally. In the drawing to the left above are shown the ventricles of the brain where the alchemical distillation takes play. The mechanisms of the cerebro-spinal system are akin to the furnace and retort/receiver bodies used in mundane distillation. In this analogy the distillation chamber itself is in the brain. The natural production of shen within the human being is mind power. Do not think shen is mind for shen is much more than mind. Mind is a manifestation of shen.

The major religions and philosophies direct the pilgrim to calm the mind using the analogy of a still pond that reflects distortion free the mysterious transcendent inspiration of cosmic origin. The still pond reflector state is passive shen. When one receives the manifestation of passive shen—the reflection of inspiring ideas upon the still mind, and then returns to the outer world and puts the ideas into action so that they become manifest, then one is using active shen power to manifest the idea (passive shen) in the world. Shen is the power to do things.

Will and imagination are fed by shen power. In alchemy will is fixed sulfur and imagination is volatile sulfur. Both are conditions of the alchemical soul. When you “imagized” the chi power in the circulation praxis of the first gemstone you were employing basic shen through volatile sulfur to manifest the chi power. However if you tried to entertain both concepts in the beginning the manifestation would more than likely fail thus discouraging you from further attempts.

You use shen power through volatile sulfur to configure the concept of the inner circulation. You use shen power through fixed sulfur to set the inner circulation concept into motion. Imagination and will in this way stir spirit into motion. Moving spirit is chi. It is felt as vibration which is waveform energy. When you feel vibration in the circuits of the subtle body that is chi power energizing you. Chi power engenders feelings of calmness and serenity.

Sublimated ching does not vibrate like chi power, It pulses and surges as discrete energy quanta more like bits than waveforms. When you feel the pulse as a fluid or gas-like plasma moving up your spine and packing density at the base of your skull that is ching power enlivening your subtle body. In this respect ching is likened to the alchemical salt that gives form to the subtle body so that It unites there.

After the chi/spirit, the ching/body and the shen/soul have each been separated from It by conscious awareness, feeling and sensation, so that one knows each power separately, They reunite as One in the subtle body which then evolves according to your nature.

The alchemical development described thus far will take time to gestate through practice. Your new alchemical body—immortal fetus will evolve. That evolution is unfolding manifestation and fed primarily by shen power.

True you will circulate chi daily to keep power in your channels. Not to do this is to invite general crapulence and senility, such is the path leading to mortality. The alchemical being that you now are will naturally avoid lethal intervals of toxic crapulence.

Continue Creation into Manifestation: This is the Power most powerful of all powers. This is distilling shen. When enough alchemical power has saturated the shen collectors in the ventricles of the brain, the left and right shen channels open like magnetic fields around parallel rods on either side of your head. That placid calm pond of a mind state upon which images manifest begins to heave like turbulent seas, until the shen rotates in toroidal motion. It boils away from the rotating center like waters separating in an alchemical retort. These waters of shen distill the alchemical body through space/time into Eternity where one is ONE at the center.

One is now able to go forth from here to Eternity and return without transition through death the usual route. Pilgrims describe near death experiences many with similar circumstances. A white light or tunnel appears. The pilgrims travel into the light or tunnel. As they go revelations impress themselves upon these travelers. At some point for some reason or circumstance the person returns to the Macrocosm with visions that affect their lives profoundly.

I have never been able to distill enough shen from sublimating ching to open the shen channels. You can charge them with density and refine your powers of perception and concentration, but the channels will not unfold. I believe it is Entropy that keeps the conversion ratio too low to open the channels. 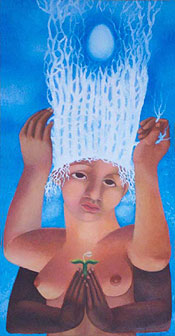 When the Supreme Ultimate and the Immaterial Spirit unfold, the Point at the crown of your head opens and the light or tunnel or shaft leading to the Cosmic Egg is revealed.

When the elixir is ready to use one should begin separating chi into the inner circulation. After a few rotations smell the aroma of the elixir on the inhalation. Feel the energy that is added to the chi. At the end of the exhalation place a few drops in your mouth on the tongue. Mix with saliva and inhale through the nose and do the next rotation. Upon the exhalation as the charge rises more saliva will flood the mouth. Mix it with the elixir. When you have enough saliva swallow at the inhalation and draw this fusion into the circulation. Draw some of the vapors from your mouth into the stream of air going into your lungs. Let the alchemical fusion expand up the front channel.

Rotate as long as you like; stop when you will. For more energy add a few drops to the circulation. If you add enough of the elixir the energy rotating will begin to distill. You will feel It rising like dragon fire up the center channel (very colorful but does not burn). It distills into the lateral ventricles. The pressure expands out the Sylvian fissures above the ears. The dragon wings open feeling like great magnetic fields extending about one foot from the head. More fire and the dragon wings unfold again and extend the field down the length of the body.

Lynn Osburn is co-author of Green Gold: the Tree of Life, Marijuana in Magic and Religion published by Access Unlimited. For more information email openi420@juno.com.

Individual one off contributions to our vision can be sent through paypal www.paypal.com to the Energy Enhancement Synthesis of Light Paypal Account, sol@energyenhancement.org